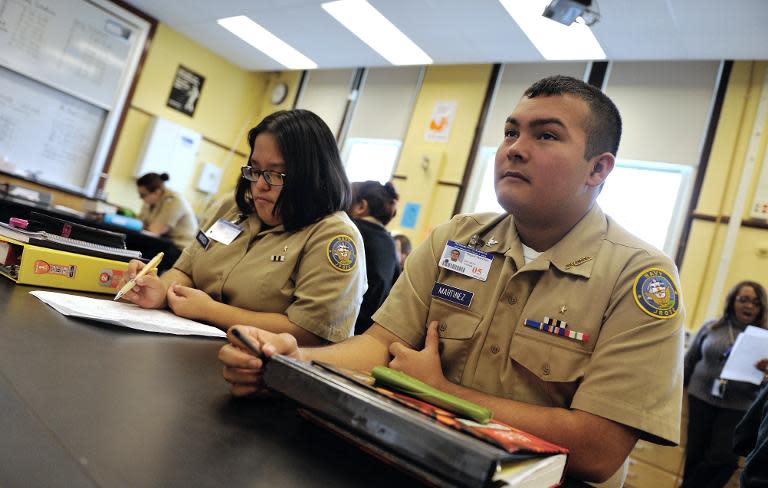 Chicago (AFP) - The first time Miguel Martinez visited a college campus, it was for a summer camp paid for by the US Navy, which is investing millions to improve public education and, ultimately, potential recruits.

While cash-strapped school districts are anxious for the help, critics contend that it comes at too high of a cost: the militarization of schools and the indoctrination of the young.

For Martinez, who hopes to be the first in his family to go to college, a science-focused camp at Purdue University was something his family never could have managed without the Navy’s help.

“It got me excited,” he told AFP. “It gave me an idea of what kinds of things I’d be doing.”

He hopes to get a military scholarship to college and sees enlisting as “one of my main options if engineering doesn't work out.” 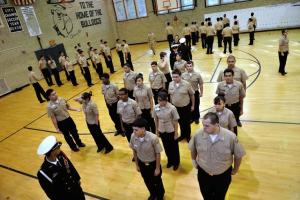 Cadets practice their formation on October 22, 2013 at Rickover Naval Academy, one of seven public h …

In the meantime, he gets to build robots after school in a Navy-sponsored club.

The US military has been warning for years that the poor quality of public education – coupled with an obesity epidemic – is making it hard to find recruits with the skills needed for modern warfare.

That's a real problem for the Navy, where more than half of the service's engineers, weapons developers and other scientific professionals are eligible for retirement in the next seven years.

The Navy announced plans in 2011 to nearly double its budget for supporting science, technology, engineering and math (STEM) education to more than $100 million a year by 2015. 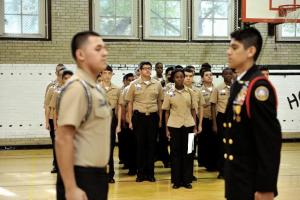 Cadets practice their formation on October 22, 2013 at Rickover Naval Academy in Chicago, Illinois ( …

The latest project is a $2 million partnership with the city of Chicago to enhance STEM education at seven public high schools by integrating curriculum developed by the Navy and supporting after-school enrichment and summer camps.

“A highly-trained STEM-capable workforce allows the Navy and Marine Corps to run our ships, fly our planes and design the next generation of war-fighting tools,” Navy Secretary Ray Mabus said on a recent tour of one of the chosen schools.

Chicago was a natural fit for the pilot project, which launched with a camp over the summer and in schools this fall.

The city already had six public high schools run as military academies, which enroll nearly 2,800 students, the largest contingent in the nation.

And with more than six applicants for every spot, it recently announced plans for a seventh that will combine middle and high school. 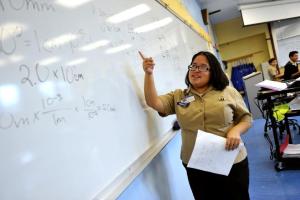 The military-style options, with their emphasis on discipline and college prep, are seen as attractive in a city where many schools are disrupted by violence, dismal test scores and high drop out rates.

'They're lying to the public'

But critics say the military already has too much influence on American culture and shouldn’t be allowed to use schools and the Junior Reserve Officer Training Corps program that operates in more than 1,600 high schools to recruit children.

“They're lying to the public by saying this is about citizenship. It's about discipline,” said Jesus Palafox of the National Network Opposing the Militarization of Youth.

“It’s about trying to get soldiers into the military.” 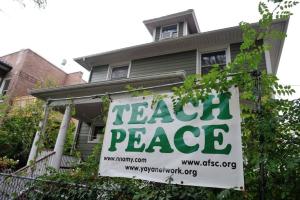 A banner urging schools to 'teach peace' hangs across the street on October 22, 2013 from Rickover N …

School districts should be focused on providing children with a quality education so they don’t need to turn to the military as a way out of poverty, said Darlene Gramigna of the American Friends Service Committee, a Quaker group that promotes peace.

“If people want to join, that's a choice,” she told AFP.

“They're creating a climate for young people where they feel the military is the only way for them to get an education.”

But Commander Mike Tooker insists that is absolutely not the case at Rickover.

“We discourage students from enlisting, because the whole point is college prep,” said Tooker, a retired pilot who is the school's military director. 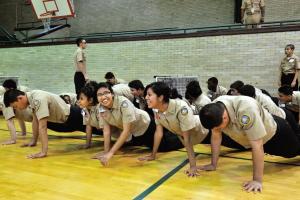 Cadets laugh while doing pushups on October 22, 2013 in Chicago, Illinois during formation at Rickov …

All 79 students who graduated from Rickover last year were accepted into at least one college or university. They were offered a total of $7.5 million in scholarships and financial aid – most of which did not come from the military, Tooker said.

Not all of them were able to attend college: many didn’t have the financial means, even with some aid. About four to eight students end up enlisting every year – which Tooker said is pretty standard for a school where 86 percent of the students are low income.

Tooker -- a genial man who runs a host of school clubs including sailing and public speaking -- compared the school’s five military instructors to the nuns and priests at a Catholic school who teach strong values to the students.

“We're constantly reminding the cadets what the proper, respectful thing is to do,” he explained.

The mayor’s office defended the military academies as one of many alternative programs used to provide the district's 400,000 students with good choices.

The city has already partnered with universities and major tech companies like Microsoft, Cisco, IBM, Verizon and Motorola to advance STEM education in the district.

“The grant from the Navy has just accelerated what we can do,” said Beth Swanson, the mayor's education deputy.

“They have an incredible amount of research in education and training in what happens in the Navy with their own personnel, and they’re able to adapt that to students in Chicago.”