‘America’s Army’, the Pentagon’s Video Game, Shuts Down After 20 Years

For two decades, the U.S. Army used a video game to reach new recruits. It’s finally shutting it down. 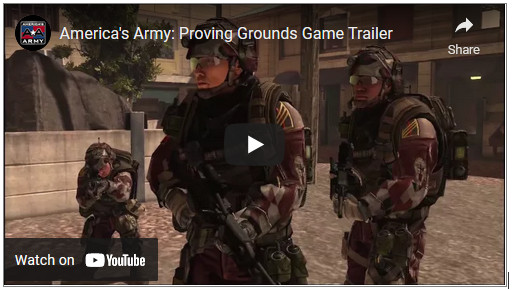 Matthew Gault | Vice - America’s Army: Proving Grounds, a game used as a recruitment tool by the United States government, is shutting down its servers on May 5 after existing in various iterations for 20 years. After that date, the game will be delisted on Steam and removed from the PSN store. Offline matches and private servers will work, but the game will no longer track stats or provide online matches.

For 20 years, players have been able to download and play the Counter-Strike-esque game for free on PCs and consoles. It was a recruitment tool when no one else was using video games for recruitment, a free-to-play game well before that became common, and an attempt by the U.S. Army to reach a new generation of Americans.

“The free-to-play America’s Army PC Game represented the first large-scale use of game technology by the U.S. government as a platform for strategic communication and recruitment, and the first use of game technology in support of U.S. Army recruiting,” a forum post announcing the game’s shutdown said. “Three mainline titles and more than 20 million AA players later, the series’ original purpose continued. There have been over 30 million objectives completed, 180 million successful missions accomplished, 250 million teammates assisted, and many more in-game achievements attained in AA:PG alone.”

In 1999, after a recruiting shortfall in the U.S. Army, Col. Casey Wardynski had an idea. Kids were playing video games all the damn time. Why not meet them where they were and design a video game that reflected American military values. Developed internally by the Army, America’s Army launched three years later in 2002.

It was a wild success. After flagging throughout the 1990s, enthusiasm for the American military skyrocketed after 9/11. Wardynski’s video game hit the market at just the right time to capture that enthusiasm. It was a first person shooter similar to Counter-Strike or Rainbow Six with some additional rules that reflected military culture. Team killers, for example, were sent to the brig. Most importantly, it was free.

For a brief period, Wardynski was all over mainstream news. "It's designed to give them an inside view on the very fundamentals of being a soldier, and it's also designed to give them a sense of self-efficacy, that they can do it," Wardynski told the Washington Post in 2005. "We want them to see that they can succeed in doing this. You don't have to think what it would look like—you can see what it looks like."

He was even interviewed on Fox News in 2007 after a man used skills he said he learned from America’s Army to save two people after a car accident. This interview generated what is probably the only positive video game coverage ever to air on the network.

America’s Army saw a number of spinoffs and sequels. Released in 2013, America’s Army: Proving Grounds was the latest and last mainline iteration. Did it work as a recruiting tool? That’s hard to quantify, but a 2008 MIT study concluded that “30 percent of all Americans age 16 to 24 had a more positive impression of the Army because of the game and, even more amazingly, the game had more impact on recruits than all other forms of Army advertising combined.”

But times change and America’s Army hasn’t had a major release in 10 years. What was once a game changer—the game being free—is now routine. Gamers can play Fortnite or any number of other shooters without spending a dime. That doesn’t mean that the Pentagon is abandoning gamers, just that it’s changed its tactics.

The U.S. Army, Navy, National Guard, and Air Force have all launched their own e-sports teams in the past few years. The teams are full of active duty soldiers and sailors who answer questions about life in the service while shooting people in Valorant and Call of Duty. The goal is for viewers to develop parasocial relationships with service members and think about joining us as a career choice once they’re of age.

The Twitch recruitment drive has been fraught. A Navy streamer played Among Us with close friends who referenced the atomic bombings of japan and a racial slur during an official Navy stream. A National Guard streamer repeated a white nationalist slogan during an official stream. Rep. Alexandria Ocasio-Cortez (D-NY) attempted to pass legislation banning the use of Twitch for recruitment.

During these controversies, people kept playing America’s Army. The player base had dwindled, but a dedicated group of a few thousand kept the servers alive. The official YouTube page uploaded a clip of the month regularly, but each video only gained around 1,000 views. Rumors of a new version of the game were seemingly confirmed in 2018, but no news followed. Now, it seems, the Pentagon’s early foray into gaming is ending with a whimper.

The idea that video games could prepare recruits for war is ludicrous and disgusting on its face. But that was never quite the point of America’s Army. The games were shooters, yes, but they weren’t meant as training tools. The video games were about building a relationship between players and the military as early as possible. It was about raising brand awareness and making the military seem just enticing enough to be an option in the future. It was about making the military a part of everyday life.

For 20 years while the War on Terror was at its height, that strategy worked. Now, after the disastrous end of the war in Afghanistan, the militarization of police, and 20 years of endless war, support of the military is waning.

It’ll take more than a free video game and some personable personnel streaming on Twitch to turn that around.